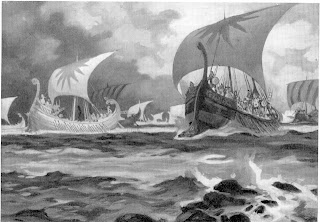 The ability of a state to put a war fleet to sea depended, at this date, on two key elements: men and money. Each trireme, as we shall see the dominant type of warship, required a crew of around 200 men. A force of a thousand men, therefore, would crew only five ships. Many would argue that such manpower would be better used in land warfare, but that is to miss an important economic element.

The men who marched to war were expected to supply their own weapons and equipment. As we have seen the full panoply of a hoplite did not come cheap and only a minority of citizens in any Greek state could afford the price. Most men, therefore, marched as light infantry or served as garrison troops. Useful as such men were, they were not the decisive factor in a pitched battle.

Sailors, however, needed nothing except their musclepower to be useful at sea. Nor did they need to be rich enough to provide for their families while they were away fighting for it was normal to pay naval seamen. At the time of the Thermopylae campaign the going rate was three bronze coins, known as obols, per day. This was not far off the wage a skilled labourer could expect. With six obols to the silver drachma that put the cost of a crew at around 3,000 drachma per month. In addition to this, it was generally thought that during a season’s fighting a trireme would need to have around 3,000 drachma spent on repairs, refitting and new equipment. It was, for instance, assumed that at least half the oars would be broken even if no combat took place. Thus the running cost of a trireme for six months of fighting was around 21,000 drachma.

Compared to the running costs, the initial construction of a trireme was a surprisingly modest 6,000 drachma. The process of construction took about two months, but all states had only limited numbers of skilled workmen. Even at full stretch the Athenian shipyards could produce only 50 triremes per year, and this led to many complaints that merchant shipping was suffering by the diversion of labour.

Given the costs of building, maintaining and crewing a warship, the Greek states had every incentive to keep their ships out of action for as long as possible. To this end every port had a number of ship sheds built along the shore into which the warships could be dragged for storage. Here they were protected from the sun, rain and wind. Just as important they were out of the water, ensuring that no weeds grew on the hull and no boring animals drilled into the timbers to weaken them. Only when they were needed, were the poorer citizens hired as oarsmen, the ships launched and sent off to war.

Not only did this provide a useful summer income for thousands of men, but some states also earned a tidy sum by renting out ships, complete with crew, to other states. A fee of around 5,000 drachma per month was considered reasonable, which gave a mark up of about a third. Not a bad profit.