Hampton Court Bridge - Surrey
Above Kingston Bridge stands Hampton Court Bridge. The first bridge here was erected in 1752 by a local man named James Clark, who believed that he could make a tidy profit on the construction cost by charging a toll. He was correct and in 1778 Clarke’s first flimsy wooden structure was replaced with a more solid timber bridge. The construction of Molesey Lock by the City of London just upstream of the bridge changed the river flow, undercutting the piers and making the bridge dangerous. The then owner persuaded the City to pay him damages, so a new iron bridge was erected in 1864. In 1926 it was decided to link the Portsmouth Road to Hampton Court Bridge by constructing an entirely new, wide straight road across the farmland between the two. The expected increase of traffic over the bridge led to the construction of a fourth bridge by the government that would be toll free. The two-pier concrete and brick structure was opened in 1930 by the Prince of Wales.
from "A Little Book of Surrey" by Rupert Matthews.
Get your copy HERE 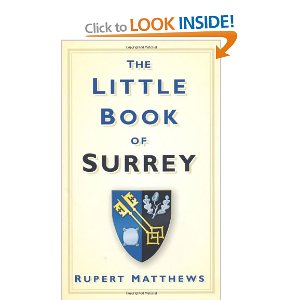 Posted by Rupert Matthews at 02:49