The Battle of Bindon, Devon, ad612

The Battle of Bindon, Devon, ad612

1) In Axmouth find the parish church at the western end of the village, just off the B3172.

In 612 this area was in a state of religious flux. The Christianity of post-Roman Britain was crumbling in the face of militant English paganism. There was probably no church here on the day of battle, but there may have been a wooden preaching cross. The village was certainly here as a cluster of wooden buildings.

More significantly from a military point of view was the old pre-Roman fort up on Hawkesdown Hill immediately north of the village. This mighty earthwork, now hidden in the hilltop trees and inaccessible to the public, had been built to command the estuary of the Axe. Although excavation by modern archaeologists here has been minimal, it does not seem to have been re-occupied and refortified in post-Roman times. In 612 it would have been available as a makeshift military post, but was no fortress. The kings of Wessex may have had a small lookout post permanently established there, but in any case Cynegils almost certainly had a scout or two up on the hill to look for the expected invasion.

That invasion came in the form of a powerful army led by the King of Dumnonia himself. A royal army such as this coming from a Welsh kingdom in the early 7th century would have had its weapons and tactics based on late-Roman models, adapted for the new conditions of recruitment and training with which the Dumnonians found themselves faced.

In terms of numbers the army would have been about 5,000 strong. The vast majority of these men would have been infantry. They were most likely equipped with large, round wooden shields about three feet in diameter and many had helmets. All men were armed with a heavy thrusting spear about eight feet long, though the secondary side arm might have been a sword, axe or heavy knife. Some men had body armour, either of mail or of toughened leather.

There would also have been a few cavalrymen, perhaps around 300 or so. These men were more heavily armoured wearing chainmail shirts that reached to elbow and knee as well as metal helmets and oval shields. Each mounted man carried a handful of throwing javelins, with a long, heavy sword at his belt and probably a knife as well. These men did not have stirrups to help them ride, but probably still retained the late-Roman saddle with its projecting horns that could be gripped by the knees.

Ideally the tactics used by such an army would have seen the infantry forming up in hollow squares or circles with the men three or four ranks deep. These defensive units remained fairly static on the battlefield, blocking fords or occupying high ground as the situation demanded. The cavalry moved swiftly around the battlefield, showering the enemy with javelins before wheeling away to safety. The feigned flight of the cavalry may have lured a disorganised enemy into charging the infantry blocs. If the opportunity offered itself the cavalry were capable of forming up knee to knee to deliver a formation-smashing charge with the riders wielding their long swords to murderous effect.

When used properly, such tactics could be awesomely effective. But by the early 7th century the kings of Dumnonia and other Welsh kingdoms were faced by a lack of riding horses for their cavalry and by the fact that their infantry were only partly-trained farmers who lacked the iron discipline of the full-time Roman soldiers for whom such tactics had been devised.

from "Battlefield Walks of Devon" by Rupert Matthews.
Get your copy HERE 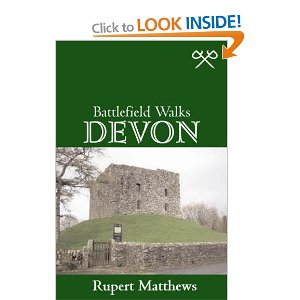