1) From Chartham Railway Station, walk south along High Street until you reach the parish church on your right. Just beyond the church the High Street crosses the Great Stour by way of a narrow bridge. Immediately before the bridge a small metal gate gives access to a footpath that runs along the north bank of the Great Stour. The path is surfaced with gravel and is clearly signposted as being the “Stour Valley Walk”. If you continue over the bridge you will find the Artichoke Inn, which has a restaurant attached, and a shop selling snacks and cold drinks.

It was along this north bank of the Great Stour that the army of the Cantium tribe was ranged. Whoever commanded the Cantium in this battle – Caesar does not record his name – had obviously learned from the battles fought in Gaul. He knew that his Celtic tribesmen were amateur warriors and would be no match for the professional Roman legionaries in open battle. Instead he had chosen to defend a river, backed by wooded hills topped by a hillfort. It was a strong defensive position that the Cantium had good hopes of being able to hold at least for the few days that were needed before King Casivellaunus of the Catuvellauni arrived with his much larger army.

2) Continue along the footpath for about half a mile. You will then reach a private road which crosses the river by way of a brick bridge to reach Horton Farm. Go straight across the road, continuing along the Stour Valley Walk as it squeezes between the river on the right an old flooded gravel pit on the left.

Somewhere along this stretch of the walk there used to be a ford across the Great Stour. It was dredged out in the 18th century when the river was deepened to be able to carry canal barges and its precise location is lost. It was at this lost ford that Caesar chose to force the passage of the Stour and get his army across.

Caesar used his elite 10th Legion to force the crossing. He ordered the men to adopt the formation know as the testudo, or tortoise. In this formation the men formed up in a dense column. The men at the front and flanks held their shields so that they overlapped, while those in the centre lifted their shields up to form a roof. The purpose was to provide protection against missile weapons, such as the light javelins with which the Britons were armed.

The 10th Legion moved down the slope from the Roman position  on Larkey Hill, visible across the river. They crossed the ford seven men abreast while being pelted with javelins and sling stones and reached the north bank. Once across the river, the legionaries fanned out, pushing the more lightly armed Britons back. Gradually the Romans secured a large, semi-circular bridgehead which was rapidly filled with more legionaries marching down from Larkey Hill and crossing the ford.

After about two hours fighting, Caesar judged that he had enough men over the river to take the battle on to its next stage. He rode over the ford himself to take personal command of the critical break out stage.

From "Battles of Kent and Sussex" by Rupert Matthews.
Get your copy HERE 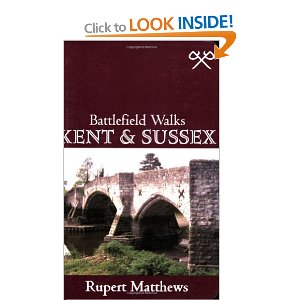