From Herstmonceaux return to the A271 and head east to Hailsham. In Hailsham turn left down the A295 then left again along the A22. At Polegate turn right along the A27, passing Lewes and Brighton before turning north along the A283 toward Steyning. Just before entering Steyning find Bramber Castle on the right.

At Bramber you will see the impressive ruins of the great Norman castle built by William de Braose. The powerful fortress was built to guard the Adur Valley against invaders seeking to use this route through the South Downs. Smaller sea-going ships could reach Bramber and there was a small dock just below the castle walls. The fortress was never put to the test and by the 17th century was obsolete. The defences were destroyed with gunpowder by Parliament after the Civil War to prevent it from serving as a focus for a rising by Sussex royalists. Adjacent to the entrance to the ruins is the church of St Nicholas. This was built at the same time as the castle to serve as the chapel to the inhabitants. Its tower was likewise brought down by the Roundheads, but unlike the castle it was subsequently restored. This is a charming little place of worship which contains much original Norman stonework. 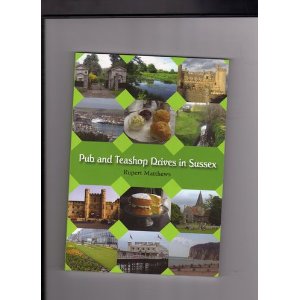 from Pub and Teashop Driuves in Sussex by Rupert Matthews

Publication Date: 15 April 2010
If there are two marvellous things about England that can be found nowhere else on earth, they are pubs and tearooms. Both types have their fans but together they sum up so much about England that is special and unique. And Sussex had some of the finest in the kingdom. With seventeen drives designed to start with a light lunch, then afterwards, a leisurely drive through the beautifiul Sussex countryside. Finally stopping off for afternoon tea. What better way to spend an afternoon!
Posted by Rupert Matthews at 01:17