The Triumphs of Commodus

When the Emperor Marcus Aurelius died in March 180 he and his son Commodus were two years into a gruelling campaign against the German tribes north of the Danube frontier. Commodus’ first action was to have himself proclaimed Emperor by his army. His second was to declare that the war was won and that he would celebrate a Triumph.

Leaving his subordinates to patch up a peace treaty with the barbarians, Commodus travelled back to Rome to hold his Triumph in October. All the trappings of a traditional Triumph were observed. Captive Germans were herded in the procession, captured weapons and looted treasures were displayed in carts and soldiers carried paintings representing the events of the war. Commodus painted his face crimson and donned purple robes embroidered with golden palms of victory before riding in his chariot along the usual route through the city. And, as usual, a slave stood beside him holding the laurel wreath of victory above his head and whispering “Remember you are mortal.” More unusual was the fact that from time to time Commodus turned round to kiss the slave, his homosexual lover Saoterus. The Romans may have been impressed by the Triumph, but they were displeased by the open display of what most considered a vice.

Commodus himself, however, loved every minute of the celebrations, so much so that two years later he took advantage of a minor victory over the Picts in northern Britain to take the title Britannicus and hold another Triumph. This time there were neither prisoners nor booty on hand. Commodus rounded up some British slaves living in Rome and dressed them in Pictish costume to play the role of the conquered army in the procession. The following year, lacking even a minor victory to give an excuse for a Triumph, Commodus had himself proclaimed Emperor all over again and held celebratory games. 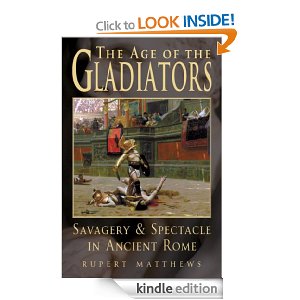 The great spectacles of ancient Rome have become proverbial for their cruelty, bloodlust and glory. In the arena, the games were savage and brutal. Gladiators fought each other to the death, wild animals were put to fight each other and criminals were executed by barbaric means.

Military victories were marked by the Triumphs when generals paraded through the city, the defeated were sacrificed to the gods and food and wine was offered free of charge on a lavish scale. Meanwhile the citizens received free bread to prevent hunger and the riots it could provoke.

The Age of the Gladiators looks at these savage spectacles and traces their development from entertainment to hysterical obsession until their eventual decline and disappearance, and explains how they still have influence on contemporary public life.
Posted by Rupert Matthews at 01:50