The reason for rthe Siege of Bamburgh 1464

The crushing defeat at Hexham and ruthless executions that followed served to destroy the Lancastrian cause in northern England, the last bastion of their hopes. A few days after the battle the Lancastrian knight Sir William Tallboys was discovered hiding in a coal mine together with a vast quantity of gold and silver coin – the main treasure of the Lancastrians.

Edward IV, Yorkist King of England, came north to accept the surrenders of those now willing to come to terms, while his cousin and leading commander the Earl of Warwick took the Yorkist army to overcome those who were not. One by one the Lancastrian castles surrendered to Warwick who, on Edward’s insistence, was offering generous terms of surrender. Only Sir Ralph Grey, who had betrayed Edward more than once, was exempted from such offers of peace. And all across the north of England Yorkist scouts, soldiers and agents searched for the fugitive King Henry VI, who had not been seen or heard of since leaving Bywell Castle the day after the Battle at Hexham.

In June Warwick and his army appeared before Bamburgh Castle.

from BATTLEFIELD WALKS IN NORTHUMBERLAND by Rupert Matthews 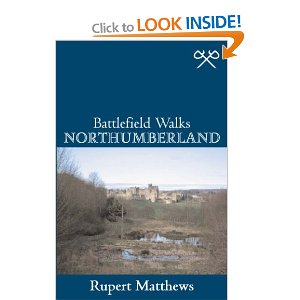 Publication Date: 1 April 2008 | Series: Battlefield Walks
Northumberland is one of the most beautiful counties in England, but also one of the most fought over. It has seen countless skirmishes, some very bloody, between invading and looting Scots and the avenging English families of the Percies, Umfravilles and Nevilles.

Rupert Matthews, ‘the History Man’, presents fifteen guided walks around the battlefields of Northumberland. He provides an account of events as they unfolded on the ground along with full background and context. His expertise, descriptive powers and lively enthusiasm bring the drama of history vividly to life.
Posted by Rupert Matthews at 02:07