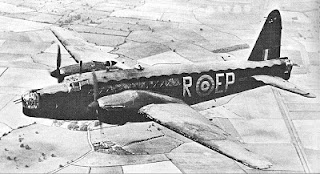 When Peirse was dismissed as head of Bomber Command, neither Portal nor Churchill had decided who would take his place. As a temporary measure the popular commander of 3 Group, Air Vice Marshal Jack Baldwin, was moved to assume control. Baldwin was told not to introduce any major changes, so he continued with the pattern of raids already established. So far as Norfolk was concerned, this meant attacking coastal targets with Blenheim squadrons and pushing deeper in to Germany with Wellingtons.

There was, however, one major strategic change that occurred during Baldwin’s time in command. The government approved a new operational directive to govern Bomber Command’s actions. It reached Baldwin on 14 February and ordered him to direct the main weight of Bomber Command into what were known as Area Bombing raids on major German industrial cities for the next six months.

The new directive had grown out of the Butt Report of the previous year. It was recognised that bomber crews, flying at night, simply could not identify individual factories or installations. Indeed, some crews did well if they identified the right town. In effect Bomber Command was being told to abandon any attempt to find and destroy individual targets at night – although day bombers operating along the enemy coast would still be directed at such targets. Instead Area Bombing involved identifying areas that were large enough so that the crews could be relied upon to find them and that contained enough economic or transportation targets to ensure that some at least would be hit by bombers striking the area. Since the majority of factories and rail junctions tend to lie in towns and cities, the Area Bombing directive effectively pointed Bomber Command at pounding industrial cities. Even if the precise targets themselves were missed, the destruction of nearby buildings would block roads and rail links, effectively making the factories unproductive for some days. Moreover the destruction of housing near the factories would mean that the workers had nowhere to live, further disrupting war production.

The fact that such cities were packed with civilians did not bother the RAF. Britain and Germany were engaged in a total war. The civilians in such cities were workers in factories producing guns, aircraft and munitions of all kinds. Killing them was considered a legitimate activity. In any case, as it was seen at the time, the Germans had started it with their indiscriminate bombing of Warsaw, Coventry, London and a dozen other cities. For the rest of the war, Bomber Command would have as its main priority the destruction of Germany’s ability to equip, feed and maintain its armed forces.

What the Chief of the Air Staff, Sir Charles Portal, needed was a man willing and able to put this new strategy into destructive effect. On 22 February 1942 he found his man in the shape of Air Chief Marshal Sir Arthur Harris – soon to be better known as ‘Bomber Harris’.