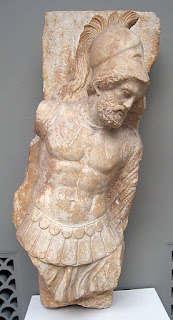 Between 1000bc and 450bc the Greeks did not lay siege to cities because the defences were too strong and armies were made up of part-time soldiers who wanted to fight a battle and go home.

After about 450bc the Greeks began to learn siege tactics from their Persian enemies and to develop ideas of their own. At the same time some armies became made up of full-time soldiers, so lengthy sieges were more practicable.

The first tactic was to surround the city and so cut it off from any sources of food or supply. This usually called for a large army to keep a good watch for anyone trying to bring supplies to the city.

In 429bc a small Spartan army built a wall of brick and timber all the way around the city of Plataea to stop supplies getting into the city.

An assault ramp of earth packed between timber piles could be built against the city walls. This allowed troops to storm up and over the wall, but only if the defenders did not heighten it first.

A battering ram could be built of a bronze-tipped tree trunk suspended from a wooden cage on wheels. This could be pushed up to the city walls and swung repeatedly to smash a hole in them.

Defenders could counter a ram by shooting the men working it. Alternatively they could lower large hooks over the walls, catch hold of the ram and pull upwards to overturn it.

During Hellenistic times (see page 38) siege techniques advanced rapidly as the kings fought for control of the rich cities in what had been the Persian Empire.

Posted by Rupert Matthews at 09:12