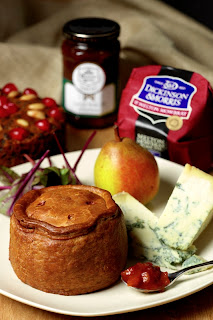 What makes a British pork pie different from others?


Mention a pork pie to people from most countries and they will imagine any sort of pork baked into a pie, but to a Briton a pork pie means a very particular type of creation.


The British raised pork pie has its origins some centuries ago as a means of preserving the meat. Unlike salting and drying, the baking of pies was not intended to keep meat edible for some months, but merely to extend the time over which the flesh of a pig could be eaten after it was slaughtered. The key to the success of these pies was in the manner in which the crusts were formed.

The crust of a pork pie is made from hotwater pastry, a pastry made by boiling lard in a small amount of water before mixing it into the flour. The dough should be kneaded well and kept warm throughout. It is then capable of being moulded into shapes which will support their own weight. Traditionally pies are made by raising the pastry into a cylindrical shape with a firm base, usually by rolling out the pastry and then gradually raising it up the sides of a jam jar. The jar is removed when the pastry has reached the required height and is replaced with minced pork, with herbs to taste. The pie is then sealed with a lid made from the hotwater pastry. A hole is cut in the lid.

In past centuries, after the pie was baked, clarified butter was poured through the hole in the lid to completely fill the inside of the pie. The raised crust ensured that the butter stayed within the pie and did not run out. When solidified, the butter excluded the air from touching the meat and so ensured that it kept fresh for some time. As days passed the hotwater pastry did not turn stale as quickly as did other types of pastry, again aiding the storage life of the pies.

These days storage of meat is not the primary purpose of baking pork pies, so the rich butter is omitted from the recipes. However, the meat still shrinks as it cooks, leaving a distinct gap between the pastry and the meat filling. Modern recipes recommend the long, slow boiling of pork bones, onion and meat scraps to produce a rich stock which will set into a firm jelly. When the pie has been baked and allowed to cool, the stock is poured in and left to set solid.

As with so many British traditional dishes, each district of the country had its own way of preparing such dishes and nowhere became as famous for its pork pies as the town of Melton Mowbray. Located in the fertile farming lands of Leicestershire, Melton Mowbray has long been a wealthy and productive area. As testament to its agricultural wealth, the town has one of Britain’s most spectacular medieval churches which boasts not only a 100 foot tower and 154 foot length  but is also one of only four churches in England to have aisles to the transept.

In the hands of the bakers of Melton Mowbray, the pork pie achieved a height of succulence and tastiness not achieved elsewhere. The precise secret of the Melton Mowbray pie was not a single feature, but more a combination of features. The pork used was of the very best quality from nearby farms and was chosen for its low fat content. The pieces of meat were diced, not minced, and a blend of local herbs was used to add flavour. Taken together the combination made pies from this small town the best in England. These days shops throughout Britain sell ‘Melton Mowbray’ pork pies the vast majority of which have never been near the place. The label may be used only to indicate that the pie is of a superior quality to the standard pie from the same company. The best, however, still have diced meat and are highly flavoured with herbs.
Posted by Rupert Matthews at 02:21