Cavalry horses of Alexander the Great 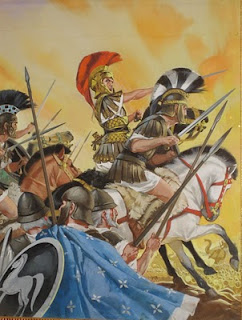 The type of horses used by the Macedonian army has been a subject of much debate over the years. Some sculptures and reliefs show horses that look rather like those of the modern day, though they appear rather more robust. Others show smaller horses that are not much bigger than ponies. Recent archaeological finds have gone some way to solving the riddle. Horse bones that have been recovered show that horses of this period were not much different in size from modern riding horses. They were, however, unmistakably heavier than is usual today. This may, in part, be due to the introduction of Arab bloodlines to nearly every breed of modern horse, or may reflect some centuries of selective breeding. Perhaps the reliefs that show pony-sized horses reflect an artistic convention that shows the humans larger than in reality.