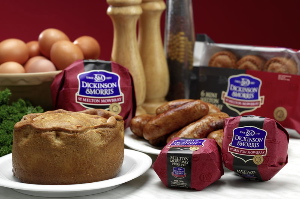 In 1890 the pies hit the international trade. Cargo ships were by then being built with large refrigerated holds to transport quality meat - mostly lamb and mutton - from Australia and New Zealand to Britain. The idea was soon taken up by the beef merchants of North America, greatly boosting the demand for beef raised by cowboys in the Wild West. But the refrigerated ships needed some perishable product to take back again if they were to turn a profit. What better than a consignment of Melton Mowbray Pork Pies, or so thought the company of Evans and Hill. They packed up a crate of pies for chilling and sent them off to Borneo. It was the start of a highly profitable export trade.

But even as the pie bakers of Melton Mowbray were enjoying their boom years, the very basis of their trade was being undermined. The problem was two fold. First the numbers of inferior pies being produced outside the town was increasing. This led the public to mistrust the label “Melton Mowbray” as being synonymous with quality. No longer did buyers in shops across England gravitate toward a Melton Mowbray label when they wanted the best pork pie on offer.

Secondly, and most invidiously, the internal combustion engine had been invented. Motor cars and bikes remained inefficient and unreliable playthings of the rich until after the First World War. By 1920, however, motorised transport had become significantly more reliable, and it was becoming cheaper. A car was still out of the financial reach of most people, but increasingly doctors, lawyers, gentlemen and noblemen were coming to rely on their motor car to get them about. The process accelerated in the 1930s and by 1939 almost anyone who needed private transport - most people relied on public transport at this date - had abandoned a horse or horse and carriage in favour of a motor car.

Riding a horse was becoming what it is today: a sport. No longer did the dashing young A-listers and aspiring gentry desperate to show off their horses and horsemanship go hunting. Instead they took their motor cars down to Brighton for the weekend or drove off to have lunch at ‘roadhouses’, smart pubs and restaurants that dotted the main roads near large towns. There they would meet with other wealthy young types to show off their cars, talk about engine capacity and top speeds or simply to chat with like minded fashionable folk and hope to catch the eye of the young ladies who also flocked to such places.

Melton Mowbray remained a key pivot in the world of foxhunting, but that sport was increasingly confined to country types or to those townsfolk who still liked to ride as a hobby. Because the younger, smarter set from towns were no longer going to Melton Mowbray in large numbers, they were no longer able to enjoy the delights of the genuine pie in its home town. They no longer went home to tell their friends about the fantastic pies on offer. They no longer demanded a genuine Melton Mowbray Pork Pie to be served at their tables in place of whatever the local baker could turn out.

Posted by Rupert Matthews at 00:45