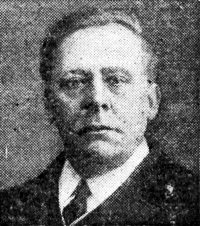 Horatio Bottomley (1860-1933) was one of the most audacious and successful fraudsters in history. Not content with swindling people out of money, he set about making himself a highly respectable member of British society being elected to Parliament twice.

Bottomley was born in London in 1860 and grew up in an orphanage. He trained as a lawyer, but chose to go into the stock exchange. In 1888 he founded the Financial Times newspaper, now one of the most respected financial journals anywhere in the world. He established the newspaper as a reputable and independent commentary on the banking and stock market activity of the City of London, but also slipped in entirely fictitious stories that boosted the market price of stocks and the was trying to sell, or undermined the value of those he was trying to buy. He joined the Liberal Party and in 1905 was elected a Member of Parliament for Hackney.

In 1908 he was arrested by the police and charged with fraud relating to a number of Australian gold mining shares that he had been selling, but which were worthless. The case dragged on for four years before he was acquitted due to lack of evidence. The failure of the prosecution was largely due to the fact that Bottomley had kept almost no written records of his transactions. He had, instead, remembered the details of thousands of deals in his head. Although acquitted the details that had come out ruined his reputation in the City and politics. The Liberals ousted him from his seat.

When World War I broke out, Bottomley turned a magazine he was running, John Bull, into an unofficial journal for the rank and file soldiers. As the numbers of men in the army increased, so did the sales of John Bull. Bottomley went on a series of recruitment drives, using his magnificent oratorical skills and flair for publicity to recruit tens of thousands of volunteers into the army - and so to become purchasers of his magazine. Throughout the war he maintained a highly patriotic stance, while earning a fortune from the magazine and the products it promoted. On several occasions he was accused of profiteering from these products, but each time he sued for libel and in most actions he won. So good was Bottomley’s grasp of the law and so powerful an advocate was he that after one trial the judge, Mr Justice Henry Hawkins, offered Bottomley his wig.

In 1918 he stood as an independent candidate for his old seat of Hackney and won a landslide victory. He then began the John Bull Victory Bond Club, a form of savings club in which investors were not paid interest, but instead given the chance to win a large cash prize each month. In 1921 he was charged with fraudulently siphoning funds out of the Bond Club into his own bank account. This time he was convicted and sent to prison for seven years.

After his release, Bottomley went on the stage with a one man show in which he recounted the story of his life, recreated amusing courtroom events and explained how his fraud had worked so as to warn the public against other fraudsters. He was by these means amassing a third fortune when he died suddenly in 1933.

Posted by Rupert Matthews at 11:51