Pevensey Castle - and some tea and cakes 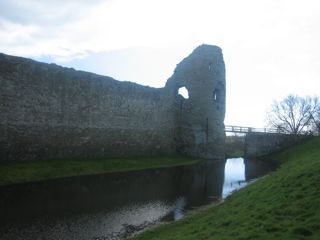 In Pevensey the main attraction is the huge castle. This vast defensive work was established by the Romans toward the end of their rule in Britain. The outer walls with their massive bastions were built in around ad350 to form part of the defences known as the Saxon Shore. There was then a harbour just outside the walls where the Roman warships could dock, but this has now silted up completely and the sea retreated a mile or so to the south. The fortress formed a heavily defended base and arsenal from which the ships went out to patrol the Channel and attack the Saxon raiders. By this date the Saxons were raiding far down the Channel and even attacking the northern coasts of Spain. The Saxon Shore command with its fleet, soldiers and forts did much to curb their depredations, but they were costly to maintain. In about ad410 the Empire abandoned Britain, granting an independence that everyone thought to be purely temporary and telling the Britons to defend themselves. For a while the Saxon Shore defences were maintained, but then they collapsed in circumstances that remain mysterious. Over the next fifty years the Saxons and their allies the Angles and Jutes established themselves as settlers in eastern Britain. Later, when Romano-British resistance collapsed around 540 with the death of the man remembered as King Arthur, the invaders established themselves as masters and founded a series of kingdoms that would become England.

One of the key events in this process took place here. In 491 Aelle attacked Pevensey, then held by a strong force of Romano-Britons. He and his men managed to get inside the defences and slaughtered everyone that they found. The brutal battle seems to have marked the moment when Aelle became independent of the central British authority that had survived from Roman times to about this time. We know that Aelle had landed at Selsey in about 477, but do not know his exact status. It is likely that he was a mercenary who may have been working for the Romano-Britons or who settled here to engage in a bit of blackmail. Whatever the details of his relationship with the Romano-Britons the attack on Pevensey ended it. The victory also brought Aelle the leadership of all the other Saxons, Angle and Jutish war bands operating in Britain at the time. The new found independence that he had won proved to be permanent. Large numbers of Saxons flooded across the seas from northern Germany to settle in the lands that Aelle had conquered. These were to become the Kingdom of the South Saxons, or Sussex.

The strategic position of the site and the robustness of the Roman walls were not lost on later generations. The English maintained the defences, though they do not seem to have manned them permanently except at the height of the Viking menace. William the Conqueror gave the castle to his half-brother Count Robert of Mortain on condition that he manned the defences. Robert did not have enough men to man the entire fortress, so he built a castle in one corner of it. This castle was improved and enlarged several times over the next 300 years and remains to this day. The fortress was updated again in 1588 to stop soldiers from the Spanish Armada getting ashore here. It was renovated again in 1803 when Napoleon threatened to invade, and was most recently refortified in 1940 to guard against a German assault.

Having viewed the castle, find Castle Cottage Tea Rooms nestled under the castle walls, close by the car park at the top end of the High Street.

From Teashop Walks in Sussex

Posted by Rupert Matthews at 01:01