The German Navy starts to rearm - before Hitler 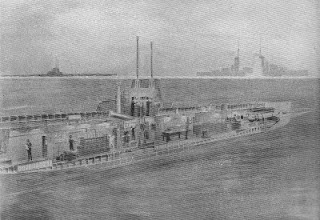 Hitler was, first and foremost, an army man. He had served in the army during the four long years of the Great War when he lived in the trenches of the Western Front for months at a time. When he because Führer it was to the army that he first turned his attention. For Hitler the air force had interest only in so far as it served the army. The navy was barely of interest at all. And yet if Germany was to live up to Hitler’s pretensions to world power, it would need a navy to project that power.

The German war navy had been secretly re-equipping itself for war before Hitler came to power. Under the terms of the Versailles Treaty, the Germans were forbidden to have any submarines at all, and surface ships were restricted to 10,000 tons, less than a third the size considered necessary for a battleship and barely large enough for a light cruiser. The navy had no intention of being bound by these restrictions, but through the 1920s were hindered by the politicians, who feared that the building of large warships could neither be hidden nor explained away.

In 1928 Erich Raeder was appointed Commander-in-chief of the Reichsmarine and given instructions to make the navy as effective as possible within the terms of Versailles. Significantly, during the 1920s, Raeder had been writing the official history of the cruiser operations of World War I, having served in cruisers for most of the war. It was as a cruiser man that he looked at the problem.

In drawing up plans to make the German navy an effective weapon of war, Raeder made a number of assumptions. First he reasoned that German naval operations would be limited to inshore work in support of the army in the event of a war against any likely enemy, except Britain. Second, Raedar believed that if Britain were the main enemy then Germany would have to aim to strangle Britain’s sea supply routes. Germany could attempt to take on the Royal Navy and defeat it in open battle, but this would need the construction of large battleships which Versailles forbade. Alternatively, Germany could develop a fleet of ships designed specifically to sink merchant ships and to avoid rather than defeat the Royal Navy.

The most obvious type of warship to achieve this was the U-boat, but again Germany was forbidden to have any submarines in its fleet. Nothing daunted, Raeder turned to the small team of engineers who had been recruited in 1925 by Wilhelm Canaris, later to be head of military intelligence, to design U-boats in case Germany were ever allowed to own any. Under Raeder this team began building U-boats for export to Turkey and Spain. Thus, the Germans gained the equipment and expertise necessary to build and operate a U-boat fleet but without contravening Versailles.

Posted by Rupert Matthews at 01:24