Who was the Real King Arthur? 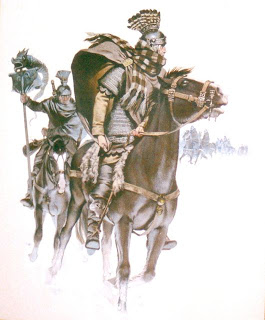 The History Man travelled to Shilton in Oxfordshire to talk to the Shilton Historical Society on the subject of "Who was the Real King Arthur".

The talk began with the legend as we have it, then ranged back to the dimly known Dark Ages that followed the fall of Roman Britain. The talk embraced characters such as Vortigern, Ambrosius, Hengist, Horsa, Aelle, Cerdic, Gildas, Merlin, Gawain, Kai and - of course - Arthur himself. The true historical background to Arthur's time was explained, after which the History Man put forward his own views and theories regarding this most enigmatic of British heroes.

To book Rupert to speak at your event contact him via HIS WEBSITE.
Posted by Rupert Matthews at 23:36