The Rise to Power of Genghis Khan 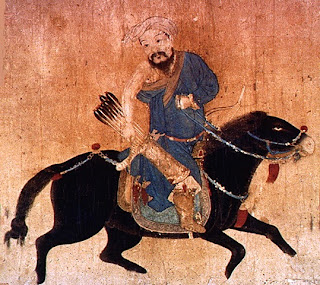 Genghis Khan united the nomadic tribes of the Asian steppes and set them on course to conquer the largest land based empire the world has ever seen. His ruthless pursuit of power, wealth and prestige makes Genghis Khan one of the most astonishing and cruel conquerors of history.

Genghis Khan was born with the name of Temujin in Mongolia in about the year 1162. His father was chief of the Borjigin, a small and rather insignificant Mongol tribe. When Temujin was about 10 his father was murdered by a neighbouring tribe as part of a feud. The Borjigin refused to be led by a boy, so they abandoned Temujin and his family to poverty. In 1182 Temujin was captured by the Tayichiut tribe and enslaved. He escaped and took to leading a band of young men who raided tribes for food and wealth. In 1178 Temujin completed an arranged marriage to Börte of the Konkirat tribe, a match put in place by Temujin’s father before his death.

The link to the Konkirat proved to be a turning point for Temujin. It gave the young warrior access to a larger force of men willing to follow him in his raids. Temujin offered himself and his men as allies to his father’s blood brother, Toghrul who was chief of the powerful Kerait tribe. Soon after, Temujin teamed up with a boyhood friend named Jamuka who was now chief of the Jadaran tribe. By a succession of alliances, wars and treaties, Temujin gradually came to be the leader of the most powerful confederation of tribes the nomadic Mongols had ever seen.

Those opposed to Temujin’s growing power grouped behind Jamuka, who also won the backing of the Naiman, another nomadic tribe. A series of battles between the followers of the two former friends followed, but before a final showdown took place Jamuka was betrayed by a group of his own men and handed over in chains to Temujin. Temujin offered Jamuka a position as a general in his army, but Jamuka replied “There can be only one sun in the sky” and requested an honourable death.

After Jamuka’s execution in 1206, Temujin was appointed supreme chief of all the Mongol tribes. It is by this title of Genghis Khan that he is generally known today.