The Hampshire Regiment at the Battle of Blenheim 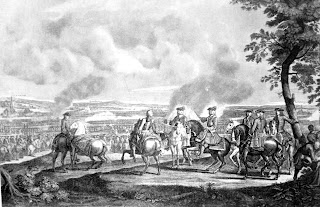 Meredith’s Regiment (later 37th North Hampshire Regiment) was in the Netherlands in early 1704, forming part of Ferguson’s Brigade in an army led by the Duke of Marlborough. News arrived that a large French-Bavarian army was advancing on Vienna, the capital of the Holy Roman Empire, so Marlborough set off on an epic march of 250 miles from Bedburg to the Danube at Donauworth in order to get between the French and Vienna. Having linked up with the Imperial commander, Prince Eugene of Savoy, Marlborough advanced to attack the French in their entrenched positions around Blenheim (now Blindheim).

French Marshal Tallard positioned his infantry in three fortified villages: Blenheim on his right and on the north bank of the Danube, Oberglau on the left and Lutzingen on the far left. Covering the gaps between the villages were artillery and cavalry, with infantry in reserve. The boggy Nebel stream ran along his entire front. He took command of the right himself and gave the left to Marshal Marsin with the Elector of Bavaria. He had about 56,000 men in all.

Marlborough planned to assault the three villages to tie down the French and Bavarian infantry, then smash through the French centre between Blenheim and Oberglau. The plan called for precise timing and close co-operation between Marlborough on the left with his army of 40,000 British and German allies, and the 12,000 strong Imperial army of Prince Eugene on the left. Meredith’s Regiment was positioned with Ferguson’s Brigade as a reserve on the British left wing. It was to support the assault on the village of Blenheim by the five regiments of Row’s Brigade.

The battle began with desultory artillery and infantry skirmishing around Blenheim and along the Nebel while Prince Eugene moved his troops over difficult ground to get to his start lines. At 12.30 all was ready. The infantry moved up to attack the three villages. On the left, Row’s Brigade reached the barricades, but after a fierce fire fight were driven back. Row himself had been killed, so his deputy rallied the men out of range of the French muskets. Ferguson’s Brigade now advanced with cavalry support, pausing only while a French cavalry charge was beaten back, then charging into Blenheim. Ferguson’s lead troops got over the barricade and were engaged in street fighting when the commander of the garrison Clerambault called in the French infantry reserve to support him.

This was the moment that Marlborough had been hoping for. He ordered Ferguson to pull his men out of the village, then to surround it and pour heavy and continuous musket fire into the village. Meredith’s Regiment was among those that pulled out, then formed up in line to fire again and again.
Behind this dense cloud of musket smoke, Marlborough moved his main force of cavalry and German infantry over the Nebel. He then launched a massed assault on the French centre — now held by cavalry and artillery without infantry support. First into action was the German cavalry which crossed the Nebel and advanced up the slope toward the French guns. The French heavy cavalry charged down the slope, tumbling Marlborough’s horse before them. Meanwhile, Lord Orkney had been crossing the Nebel with Hamilton’s Brigade of British infantry in line, four pieces of artillery and fresh cavalry on the flanks. The French charge broke against the new force and fell back up the hill. Orkney advances, supported by the mass of the German infantry and cavalry.

In the centre, the Allies now had 80 squadrons of cavalry and 23 battalions of infantry marching to attack just 60 squadrons of French cavalry, most of which had already been in action that day. The French fought well, but they could not hold back the tide. At about 4pm the French turned and fled. Marshal Tallard was taken prisoner while the Bavarians on the French left pulled out in good order and marched home.

The French infantry in Blenheim village were rapidly surrounded. As dusk came on Meredith’s Regiment was fixing bayonets ready to assault the village once again, when Clerambault came forward under a flag of truce. No less than 24 regiments of infantry and 4 regiments of dragoons surrendered, some 11,000 men. In all the French-Bavarian army had lost 40,000 men killed, wounded or captured and had ceased to exist as a fighting force. Marlborough and Eugene had lost about 12,000 men. Vienna was saved. The Battle Honour of Blenheim was one of those confirmed many years later.