RAF fighters escort an unusual mission in the Battle of Britain 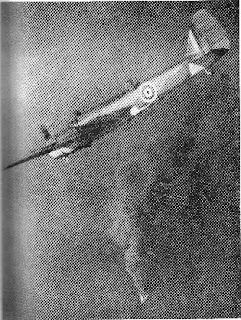 Through all this defensive mayhem, Fighter Command were called upon to fly escort missions to protect the aircraft of RAF Bomber Command that were flying over to the continent to try to destroy the gathering German invasion fleet. In ports from Normandy to Denmark craft of all types were being brought together to act as troop transports to carry the German army over the Channel.

Such combats mirrored those taking place over Kent, but this time in reverse. It was the British fighters that had to stick close to their bombers and the German fighters that could choose the time and place to attack. On one such mission Wing Commander John Gillan was leading No.615 Squadron as escort to a force of Blenheim IV bombers when the formation was bounced by German fighters over the Channel. Gillan led his squadron’s Hurricanes to meet the threat, bringing down one 109 and seriously damaging another before the Germans withdrew.

These cross-Channel raids by Bomber Command received much less publicity both at the time and since than did the defensive exploits of Fighter Command over Britain. They were nonetheless vital. By mid-September they would succeed in sinking 11% of the gathering German invasion fleet.

On the 2 September the pilots of No.66 Squadron, then at Gravesend, were asked if they would volunteer for a secret mission to start at dawn next day. Among the hands that went up was that of Hubert Allen, then a simple Pilot Officer, but later to be a Wing Commander and noted writer on air subjects. He and the two comrades selected were told nothing except that they were to be ready to take off at dawn next day and would be led by one Sqn Ldr Oxspring.

At dawn the puzzled pilots found Oxspring on the runway together with an Avro Anson, an elderly twin-engined type of reconnaissance aircraft. Oxspring’s instructions were simple, the Spitfire pilots were to follow him and keep Jerry off his back. The four aircraft climbed into the sky and headed south. It transpired that the British army had decided to try shelling the invasion ships moored in Calais harbour with long range artillery. The crew of the Anson were to “spot” for the guns, radioing back instructions on where to aim for maximum damage.

At just 10,000 feet the British aircraft circled Calais warily. The British guns opened up, sending shells splashing around their targets. Suddenly a large group of 109s was seen approaching fast. The Anson bolted home at maximum speed while Allen and his men fought a delaying action before following in the race for Kent. The experiment was not repeated.