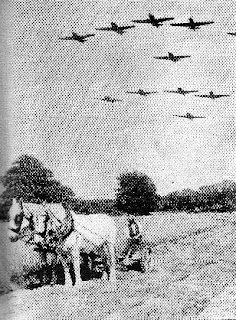 The winter of 1942/43 was spent quietly by Fighter Command. The advent of the Focke Wulf Fw190 had made Sweeps over northern France highly dangerous affairs that offered few benefits. Only Ramrods against vital targets and Rhubarbs in favourable circumstances were flown. But if the end of 1942 was bad for Fighter Command, the start of 1943 was to be even worse.

The greatest fiasco of the war grew out of a number of successful operations in 1942. The German pocket battleships, technically battlecruisers, Scharnhorst and Gneisenau had long been the most potent threat to the Atlantic convoys. Each of the two ships was armed with nine 11inch guns plus a mass of anti-aircraft weapons and secondary armament. At full speed they could top 31 knots and had armour up to 14 inches thick. If they found a convoy, they could sink it in minutes.

The two battlecruisers had taken part in the invasion of Norway, sinking a British aircraft carrier and two destroyers as well as fighting a British battlecruiser to a draw. In January 1941 they steamed into the Atlantic, sinking 22 merchant ships and forcing every convoy at sea to head for the nearest port and all convoys in harbour to stay put. The Royal Navy constantly worried that the two ships, berthed in Brest, would again put to sea to play havoc among the convoy routes.

The RAF had been called in to try to bomb the two battlecruisers to destruction. Raid after raid was launched on Brest by RAF Bomber Command, with Fighter Command’s 10 Group providing escorts. Swift reactions by Luftwaffe fighters and accurate flak over Brest meant that no serious damage was done to the ships, though the harbour facilities were badly hit. In December 1941 raids by Commandos convinced Hitler that the British were about to try an invasion of northern Norway so he ordered the navy to bring the two battlecruisers back from Brest to Kiel.

The British were aware that the Germans might try to get the two ships back to Germany, and had plans in place. If the ships sought to steer north around Scotland they would be handled by the navy, if they tried to go up the Channel they would be the target of the RAF. The codeword for the operation to stop them was Fuller, and all the squadrons of the RAF, both bomber and fighter, had a role to play. It was assumed that the Germans would time their run to pass through the narrow seas between Dover and Calais in darkness.

As night fell on 11 February the German naval crews went into action. The weather forecast was for unremmitingly bad weather for at least 24 hours, which the Germans hoped would give them cover from the RAF. Crucially, the German plan called for them to leave Brest at night when they would be unobserved even though this would put them off Dover in daylight.

When the usual high-flying dawn reconnaissance flight sent out from Britain arrived over Brest next day it was to find solid cloud cover. Nothing could be seen. Meanwhile the long-range aircraft of Coastal Command that was patrolling the western entrance to the English Channel suffered a breakdown of its air to surface radar. By the time a replacement had taken off and arrived on station, the German ships had slipped past. A ground-based radar in England picked up the array of small ships escorting the two giants, but these were dismissed as being an E-boat patrol.

Meanwhile No.91 Squadron’s Squadron Leader R. Oxspring of Tangmere had gone up to investigate a radar report of German aircraft over Le Touquet. No Fighter Command operations were due that day, so Oxspring had the skies to himself as he pushed through the murk and cloud. Oxspring came out of the cloud cover off Le Touquet to find himself confronted by a vast whirling mass of circling German fighters. Peering down to see what the Germans were guarding, Oxspring saw the Scharnhorst and Gneisenau together with their escorting ships. He hurriedly radioed the news back to base, then dived into cloud before the German fighters could catch him.

Thus it was at 11.30am that a Fighter Command officer telephoned Bomber Command to alert them of the need to implement Operation Fuller. Unfortunately both the head of Bomber Command, then Air Vice Marshal Jack Baldwin, and his deputy were in a car on the way to a conference at Air Ministry and could not be contacted. A rather gallant staff officer of lowly Squadron Leader rank took it upon himself to issue the instructions to get things moving.

Squadrons throughout southern England were scrambled into the air. Unfortunately all the RAF plans had been drawn up assuming that the German ships would be spotted hours before they got off the Sussex coast, never mind off Le Touquet. Squadron Leader Humphrey Gilbert out of Westhampnett was escorting a force of bombers on a raid to attack the ships. The force failed to find the ships, never mind attack them, but they were found in their turn by a squadron of Bf109s. In the fighting that followed Gilbert managed to shoot down one Bf109 and damage another. This was his fifth confirmed victory since he first flew a Spitfire into combat in August 1940.

In all 242 bombers took off that day, escorted by a cloud of fighters sent up from Tangmere and other stations. Given the bad weather, the lack of warning and the position of the warships, most RAF aircraft failed to find their targets. Eugene Desmond and six torpedo bombers of the Fleet Air Arm did find the ships and attacked, but all six aircraft were shot down. The only damage suffered by the ships came when Scharnhorst hit a mine off Holland.

The embarrassing failure to halt the Channel Dash was all the worse as it came as the Japanese were capturing Malaya, Singapore and Hong Kong as well as sweeping through the Dutch East Indies and Philippines. It seemed as if the British could not even control their own backyard. There followed an inquiry into the debacle. While the bulk of the blame was laid on sheer bad luck, the lack of close liaison between 11 Group of Fighter Command and Coastal Command was highlighted. Nobody came out of it very well.

For the men and women based at Tangmere the humiliation of the Channel Dash was, in part at least, alleviated by a visit from the entire company of the Windmill Theatre in London. Two shows were staged starring the Crazy Gang, Bud Flanagan and a full supporting cast. It was a huge event for the airbase.


This is an extract from Heroes of Fighter Command Sussex