Unlike at Epsom Downs, Tattenham Corner had a proper station building — albeit one of wooden construction with a slate roof. There was a ticket office, concourse, refreshment room, staff restaurant and possibly the largest male toilets on any station on the network — no doubt a necessary addition give the amounts of beer traditionally consumed at the races. In previous decades the scattered patches of shrubs and copses of trees had been good enough, but by the end of the 19th century the increasingly numbers of middle class gents arriving for the racing demanded something better.

The large area covered by the platforms, sidings and station had to be level, but the land was not. The large amounts of chalk that had to be excavated away was formed into a large, grass covered mound in front of the station that offered magnificent views across the race course to the finishing line. It was reserved for senior management of the railway company and their guests. Today such exalted guests flock to the sumptuous corporate hospitality suites at the two grandstands near the finishing line. The grassy bund is open to the public and is always packed on race days.

The busiest year for Tattenham Corner station was 1925. On Derby Day no less than 115 race day specials came to the station, carrying a total of over 50,000 race goers. The less busy Epsom Downs station still managed to cater for 54 trains carrying 20,000 people. At least as many again travelled to Epsom and walked up the hill to the race course. These trains were, on average, only 2 minutes late. Given the hugely complex task of organising all these train movements that was an amazing achievement that the railways today would do well to match. 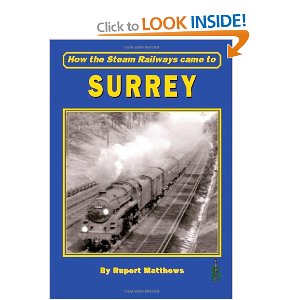 Posted by Rupert Matthews at 23:15