Shenaningans at the feasts of Caligula

The first emperor to become notorious for the debauchery of his dinners was Caligula. Caligula came to power in AD37 at the age of 24. His reign began well, but he then became seriously ill and fell into a coma. When he recovered Caligula was a changed man, many thought he was mad. He took his sister Drusilla as wife, and when she died picked up a notoriously depraved prostitute named Caesonia. Caligula used his guards to assasinate anyone who displeased him, or sent men to trial in front of bribed judges to be whipped, stripped of their property or executed.

If he tired of Caesonia, Caligula would invite couples to dinner. The man would be left outside while the wives were brought in to enjoy an intimate time with the emperor. Sometimes Caligula was interested only in conversation, but he could force himself on the women with the threat of having their husbands executed if they refused. When Caligula next met the husband, he often engaged him in lighthearted banter on the subject of his wife’s beauty and performance in bed.

from THE AGE OF GLADIATORS by Rupert Matthews. 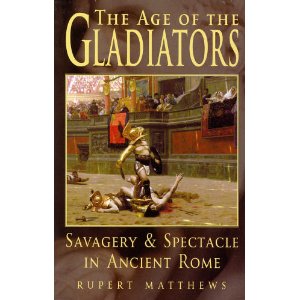