Mussolni puts one over on Hitler 1934

The dictator of Italy, Mussolini, was as keen to find an ally as was Hitler. In June 1934 he invited the German leader to Venice, tactfully including in the tour the Palazzo Vendramin where Hitler’s favourite composer, Richard Wagner, had died. Hitler accepted, but must have regretted the decision the moment he arrived. Hitler landed in Venice dressed in a blue suit and an old raincoat. Mussolini met him in a glittering uniform of gold braid and mirror-polished jackboots and backed by an honour guard in the most gorgeous uniforms the fashion designers of Italy could produce. The world’s press was on hand to take photos which were, at best, unflattering to Hitler.
Hitler was furious and tried to regain dominance by subjecting Mussolini to a two hour speech the following day when they were supposed to be making complimentary statements to each other. Mussolini, in his turn, was now angry. Little progress was made on the main point of the meeting, which was to reach some form of agreement over the status of Austria.
Before the Great War, Austria had ruled substantial swathes of northern Italy, parts of which had sizeable German-speaking minorities. Hitler had made no secret of his ambition to absorb Austria into the Reich and to embrace all ethnically German peoples into the German state. Mussolini was understandably nervous about his northern borders, particularly the area around Bolzano and Trent and wanted an agreement with Hitler. At Venice he got a vague promise from the Germans to respect Austrian independence, but it was far from being a firm pledge. 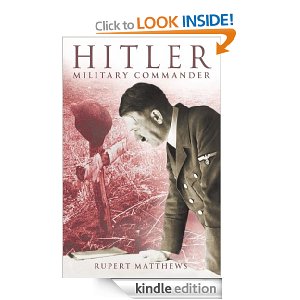 
Hitler: Military Commander examines how a non-German former corporal managed to take personal control of an army imbued with Prussian traditions, to appoint, sack and sentence to death its generals, to lead it into a world war for which it was unprepared and, ultimately, to destroy it. It examines Hitler's key military decisions during the Second World War, assesses how far these decisions were militarily justified in light of the intelligence available at the time and provides a fascinating insight into Hitler's relationships with his generals, revealing to what extent his grasp of military strategy was shaped by his personality.
Posted by Rupert Matthews at 01:17