To the pre-war military planners, Sussex was never really intended to be a major base for the RAF and its fighters. It was confidently predicted that any war with Germany would be fought out in a similar fashion to the last one. Long lines of trenches would stretch across northern Europe with British and French armies on one side, and German armies on the other. Much of the RAF would be in France, behind the front line, flying patrols over the battlefields. Those that flew from Britain would be concentrated in Kent and East Anglia, either flying bombing raids to Germany across the North Sea or fighting off raids coming the other way.

It did not turn out like that, of course, and Sussex found itself in the front line for four long, arduous years. Yet, the face of Fighter Command in Sussex grew out of that pre-war thinking, so to understand what follows it is necessary to look briefly back to the very birth of Fighter Command on 14 July 1936.

When it was formed, Fighter Command had 15 squadrons, plus three Auxiliary squadrons. The government had authorised an expansion to 35 squadrons and was providing phased payments to make this possible by 1942. There were nine stations, of which only one – Tangmere – was in Sussex.

from "Heroes of RAF Fighter Command, Sussex" by Rupert Matthews.

Buy your copy at a bookshop or Amazon 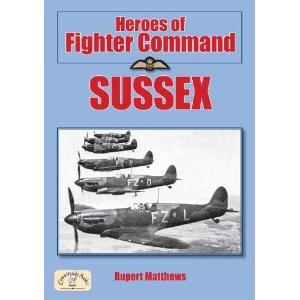 Throughout the second half of the 1930's, war with Germany seemed increasingly likely. The RAF, preparing for the coming struggle, formed Fighter Command in July 1936 under the legendary Air Marshal Sir Hugh Dowding. In this well researched and excellently written book Rupert Matthews tells the story of courageous individuals whe despite the odds, flew mission after mission during the 2nd World War.