Hitler’s first real opening move affecting the Eastern Front in 1942 took place in Berlin. By this time Hitler held three crucial positions in the military hierarchy of the Third Reich. He was the head of the army and so had control over the planning staff of the army at OKH, the Oberkommando Heer. He was the supreme commander of the armed forces, giving him control over the global strategy planned by the general staff at OKW, the Oberkommando Wehrmacht. Thirdly, Hitler was the Minister for War in the civilian government.

It was as Minister for War, that Hitler appointed a new Minister for War Production and Armaments in February 1942. The man was Albert Speer, an architect who had been responsible for building the arena for the Nuremberg rallies, the new Reich Chancellery and other major buildings. As an outsider to the Nazi Party, Speer was unpopular with Nazi veterans such as Himmler and Göring, but his undoubted gifts as an architect and organiser made him invaluable. As Minister for War Production, Speer turned German industry over totally to the war effort, boosting production of tanks, aircraft, submarines and all the impedimenta of war with consistent efficiency through to 1944.

It was Speer in Berlin who told Hitler some unpleasant truths in the early months of 1942. Blitzkrieg had failed to crush Russia in the five months Hitler had hoped for. As a result, said Speer, Germany had to plan for a war of at least two or three years duration. This, reasoned Speer, made it essential to secure for Germany a steady supply of oil while it was no less essential to disrupt or destroy the Russian capacity for manufacturing arms.

This struck an immediate chord with Hitler. A few weeks before he appointed Speer, Hitler had received a report on the Soviet capacity to wage war. The report stated the Soviets would have 1.7 million men under arms by March 1942 and that the Soviets were producing about 1,200 tanks a month. Halder, the chief of planning at OKH, was present and recorded “Hitler flew with clenched fists and foam in the corners of his mouth at the man who was reading the statement and forbade such idiotic twaddle.”

Hitler never did like bad news and would increasingly ignore it. But in March 1942 the bad news he was receiving fitted in with his own ideas and influenced the strategic and tactical plans for the campaigning summer season. The oil Speer wanted for Germany could be found in the oilfields of the Caucasus Mountains and much of the Soviet industrial plants that needed to be destroyed were in the valleys of the Donetz, Don and Volga rivers, particularly around the city of Stalingrad.

Hitler wanted a grand, dramatic campaign that stood a chance of defeating Russia in 1942 or, at least, of setting the groundwork for a victory in 1943. This, Hitler thought, could be achieved by a large-scale assault on the Russians in the south to destroy the main centre of Soviet war production, capture the oilfields and put the German forces in a position to surge north up the Volga to take Moscow from the rear and so finally destroy the Soviets. 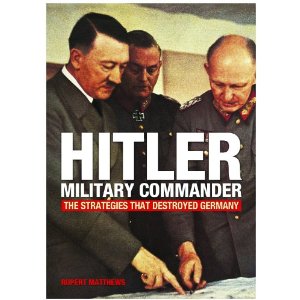 Posted by Rupert Matthews at 01:37