Bonnie Prince Charlie gets ready for the Battle of Falkirk

The Battle of Falkirk, the second to take place near the town, was the last victory for the Jacobites. The battle was fought in an atmosphere of growing political confusion, but the military victory seemed clear enough.

Having raised the standard of Jacobite revolt in the Highlands in 1745, Bonnie Prince Charlie quickly gathered an army of clansmen. At Prestonpans he crushed the English army sent against him and as a result gathered much support from the Scottish Lowlands. His march into England was halted when neither the expected French invasion nor the promised English Jacobite uprising materialised. After fighting a successful rearguard action at Clifton, the Jacobite army arrived in Glasgow on 26th December.

On his return to Glasgow, Prince Charles was delighted to find that the French had sent him reinforcements. These were not the professional troops that his army commander Lord George Murray wanted, but half a dozen heavy cannon. These guns were at once sent into the siege lines around Stirling Castle,which was still holding out after five months.

The pursuing English armies had meanwhile combined at Newcastle under a new commander, General Henry Hawley and was marching on Edinburgh. Learning of the new threat to Stirling, Hawley decided to march to the relief of the castle. Despite the successes of the clansmen at Prestonpans and Clifton, Hawley had little time for them. He knew all about their aggressive tactics but believed they could be crushed by well-trained men in a strong position under a good commander. He knew his army was composed largely of veterans and had no doubt that he was a superb leader. All he needed was to find the right position.

Unfortunately for Hawley, it was Murray who got into position first. About noon on 17th January Murray drew his army up on a ridge west of the town of Falkirk where he blocked Hawley’s route to Stirling. The Jacobite army was for a time confused when John O’Sullivan, the mercenary who acted as Prince Charles military adviser, disagreed with Murray about the army’s positioning. But Murray got his way and the army deployed as ordered.

From ENGLAND VS SCOTLAND by Rupert Matthews. Buy your copy HERE 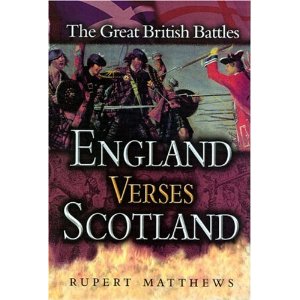 Posted by Rupert Matthews at 01:16