Things to see in Tonbridge, Kent 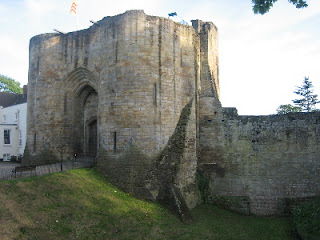 The town of Tonbridge is not included in this drive as a stop here would probably consume too much time for an afternoon. However, it is a charming place so you may care to make this drive a full day which would allow ample time to visit the town.

The town originated as a Roman settlement that was taken over the English when they invaded in the 5th century. This was the highest point that the shallow-draught ships of the day could reach from the sea, which probably accounts for the early prosperity of the place. As ships got larger, Tonbridge lost its seaborne trade but gained it again when the river was canalised this far in the 18th century.

Further trade came to the town because of the bridge here, for many years the first bridge upstream of that at Rochester. The bridge was guarded by an earth and timber fortification built by the English in the 9th century as a bastion against the Vikings. This was replaced by the Normans with a castle, the massive remains of which dominate the centre of the town to this day. The keep and curtain walls are mostly of Norman work, but the huge gatehouse with its massive drum towers was added in the 14th century. The castle remained intact until the 1640s when it was ‘slighted’ by Parliamentarian forces to stop it being used by Royalists.

The Church of St Peter and St Paul is likewise of Norman and medieval date, though unlike the castle it is still intact. In Victorian times the church was much enlarged and restored. Not everyone favours the Victorian work, but at least it saved the building from demolition. Also much rebuilt in Victorian times is Tonbridge School, a public school administered by the Skinners Company of the City of London. The school originated in a trust fund established by merchant Sir Andrew Judd in 1553, but most of the original buildings have not survived.