The Treaty of Brest Litovsk 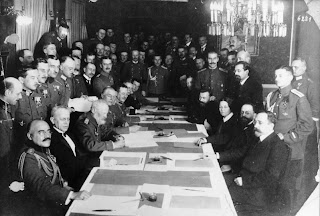 In November 1917 the Russian Communists, led by Vladimir Lenin, established control over the vast Russian Empire by carrying out a daring coup in the capital Petrograd.

In December 1917, Lenin agreed a ceasefire with Germany, and sent his deputy Leon Trotsky to the city of Brest Litovsk in Poland to negotiate a treaty with Germany and Austria. Trotsky was told to get peace at almost any price.

The Germans were keen to annex large sections of the Russian Empire, or to see them set up as German dominated independent nations.

The Austrian Empire was on the point of economic collapse. They might have wanted land from the Russians, but were even more desperate for peace so that they could move all their forces to Italy.

Once in Brest-Litovsk, however, Trotsky came to believe that Germany and Austria were ripe for a Communist revolution. If he could delay a peace treaty, he thought, revolutions would break out.

In February 1918 the Germans became exasperated with Trotsky’s delays. They told him that unless he signed a treaty at once, the war would begin again. Trotsky refused. The Germans invaded Russia.

The Russian forces did nothing to halt the German advance. They simply surrendered, or threw down their weapons and began to walk home.

By 24 February the German armies were approaching Petrograd in the north and were on the Don River in the south. The only delays were caused by problems getting supplies to the troops.

On 3 March the Russians signed the Treaty of Brest Litovsk. Poland, Latvia and Lithuania were annexed from Russia to Germany, though with vague promises that they would become independent after the war. Ukraine was set up as an independent country, but was occupied by German forces.

The Turks wanted to gain the Caucasus Mountains and nearby areas, but Germany said they should become independent of both Russia or Turkey.
From "1000 Facts on World War I" by Rupert Matthews
Posted by Rupert Matthews at 03:53