Soldiers often wear helmets. In modern wars exploding shells and rockets often throw out sharp splinters of metal called shrapnel. Soldiers take cover in trenches or holes, but their heads are the part of the body most likely to be hit by shrapnel. Helmets made of metal protect the head. 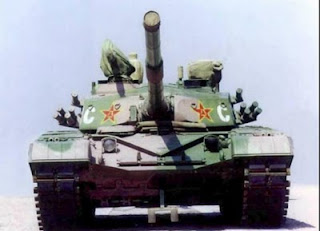 Modern armoured warfare involves tanks. The armour needed to sop modern shells and rockets is too heavy for a man to carry, but it can be mounted on a vehicle. These armoured vehicles include tanks, armoured personnel carriers (APC) and other vehicles. Like the armoured knights of the middle ages, they are the key feature of a modern army.

Riot police use helmets and shields. When police face rioters or criminals they often wear helmets and carry shields. These provide good protection against the clubs, bottles and other weapons that are often used by rioters.

Security guards wear face visors. Guards who transport money in vans or who patrol buildings at night often wear helmets fitted with face visors. These given protection against the sprays and chemicals that are sometimes thrown by robbers and bandits.

Bomb disposal men use special armour. The men who defuse bombs left by terrorists wear a special type of armour. The armour is designed to give protection against blast waves and covers as much of the body as possible while still allowing the bomb disposal man to use his hands to defuse the bomb.


1. FALSE. They wear helmets and shields.
2. FALSE. An APC is an Armoured Personnel Carrier.
3. TRUE.